Jayaprakash Satyamuthy reviews the first full length from Damnations Hammer titled Disciples of the Hex, released via I Hate Records. 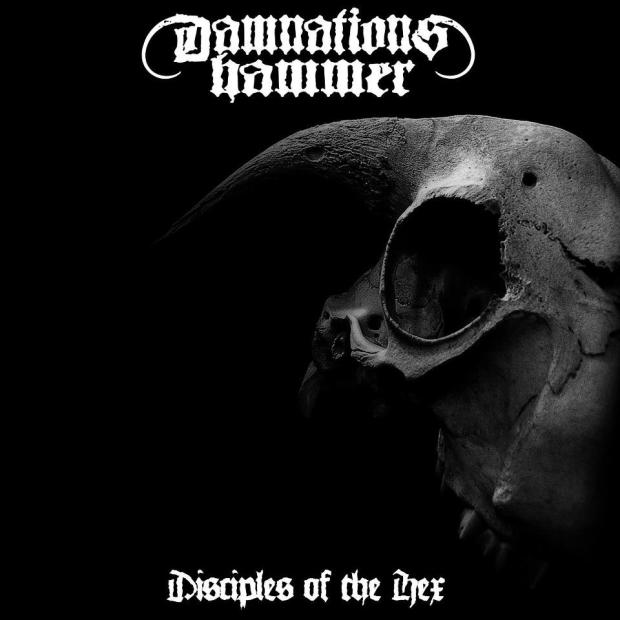 With a band insignia that bears more than a passing resemblance to the cover of Morbid Tales, lurching riffs in the best ‘Procreation (Of The Wicked)’/’Dethroned Emperor’ manner and vocals that are reminiscent of Thomas Fischer circa ‘Monotheist’, it’s clear what one of Damnations Hammer’s chief influences is (yes, the name is officially ‘Damnations Hammer’ and that missing apostrophe bothers me a fair bit).

Although described as ‘doom/death’, Damnations Hammer’s sound is really more doom/thrash, capturing the chug of the more brooding, dark aspects of the 80s extreme metal – basically a lot of Celtic Frost, maybe a touch of Venom and some Black Sabbath. The subject matter appears to draw largely on hoary sword and sorcery standbys, and I’m not complaining, as songs like ‘Throne of Fire’ pummel out a barbaric narrative with straightforward, menacing riffs and raw, authoritative vocals that everyone’s favourite Cimmerian savage would probably have listened to with a wild delight. It’s not the most polished music around, and you don’t go looking for polish when you’re invoking this kind of mood. The more doomy riffs provide a great offset to the mid-tempo thrashy lurching, sealing the deal with an ominous, almost crude yet totally effective evocation of the uncanny and sinister and one can see why I Hate picked up this originally self-released debut for a 2013 re-release.

The title track, which now has a music video, is another groovy, memorable slab of purposefully primitive metal, all chug-and-release and doomy bridges, together with a chorus that is laughably simple and irresistibly catchy. The lead guitar presence evokes the mad squall of Fischer’s flailing solos, but with perhaps a shade more control over note choice. An atmospheric spoken-word passage takes us deeper into the crypts before the palm muted guitars pick up the thread again. This feels a lot like Morbid Tales meets Monotheist, and the combination works rather well.

The rest of the tracks follow in pretty much the same direction, with the exception of the weird, Gothic atmospherics of ‘The Hex ii’. How much you enjoy this will depend on how open you are to about 41 minutes of chugging, mid-tempo metal music with a lot of ominous atmosphere but not much melodic relief, instrumental virtuosity or compositional variety to inject contrasts or highlights into the journey. I like the style this band has carved out, and they are frequently very successful in conjuring an eldritch atmosphere, but I do hope their future albums see them expanding a little bit, either stylistically or in their arrangements. In the meantime, at the very least, they’re a welcome contrast to the Black Sabbath Mk. I or OSDM cloning that seems to prevail in the retro metal scene.

Stream the entire album below: