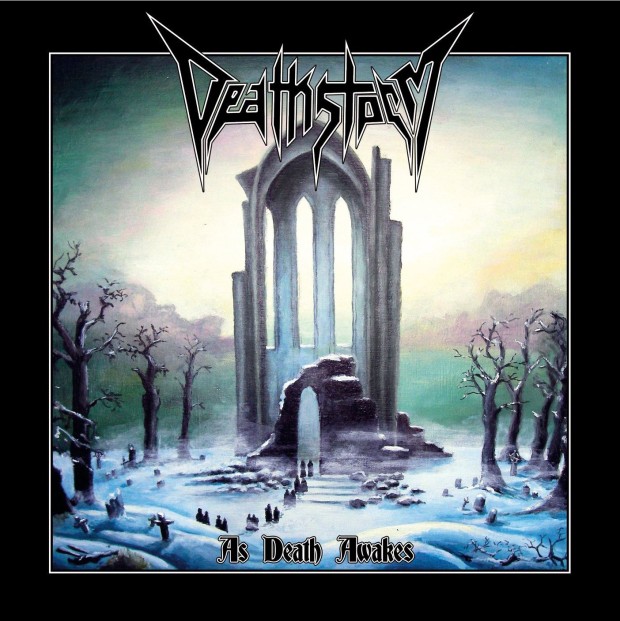 As Death Awakens is one of the first physical promotional copies that I’ve gotten the opportunity to review, and was thus obviously looking forward to finally reviewing an album by listening to the actual disc itself, as opposed to promotional mp3 copies of the same, courtesy the organic sound of a CD as opposed to digital copies. The album art-work gives a somewhat misleading impression of what awaits one in the album, essentially evoking an ethereal, otherworldly and surrealistic imagery; much in contrast with the sonic quality that the actual music of the album presents. What one faces upon listening to the album is a barrage of speed and ferocity. The first few riffs of the album capture your attention, and that immediate connect to an album is of prime importance to any listener, whether subconsciously or consciously. Deathstorm are a thrash-metal band from Styria, Austria who’ve been around since 2007 as Damage. They went onto rename themselves in 2011, released and EP and a split before unleashing this deathrashing bombardment upon the various enthusiasts that have taken the calculated risk of getting their ears chopped off.

Kicking off with a recording which speaks of the opening of the gates of hell, ‘Awakening of the Dead’ is an appropriate start to the album and is an ostentatious announcement to the listener that the gates of hell have in fact opened. This opening track exemplifies demented relentlessness – the guitar work evokes a Teutonic thrash metal style with a smattering of Bay-Area influences – in a sense a meeting of early Kreator, Morbid Saint and Slayer circa Show no Mercy-era up a few notches, and sets the tone for the rest of the album. ‘Red Blood Spillage’ is less chaotic in comparison, starting out mid-paced, and thereon losing itself in a frenzied manner, balancing itself out with slower passages, with one of these segments featuring a repeated spiralling riff eerily reminiscent of ‘Satanic Lust’ by Sarcofago. Speed is the primary facet of this album, and ‘Prepare for Slaughter’ is a testament to the same. ‘Await the Edges Blade’ is where things get interesting. While the previous tracks go straight for the kill, this song features a build up which one might find familiar on a subconscious level, but enjoyable nevertheless. This in turn leads onto a mid-tempo prelude with some interesting interplay between the bass guitar and drums. Marco ‘Mac’ Stebich’s bass work does remind one of Anthrax’s Frank Bello circa Fistful of Metal (1984). The rest of the track is standard thrash fare with some interesting, high-intensity guitar work in the vein of Sodom’s Persecution Mania, albeit much faster and fiercer.

‘Nihilistic Delusions’, with its speed-driven delirium and grinding nature of the guitar work coupled with the tortured, screechy chants truly reminds one of Morbid Saint’s Spectrum of Death in terms of how truly violent the music is sonically. The track balances the crushing, venomous thrash segments with a mid-paced break with some excellent and vaguely melodic leads that help to layer the music as opposed to serving simply as a platform to showcase the members’ technical adeptness, a trap which numerous bands fall into. While the rest of the album’s solos have an dissonant approach that evokes the likes of Kerry King and Mille Petrozza in the early era of Kreator, guitarist Ferl exhibits far more control over the notes he hits on this track, while retaining a degree of atonality to prevent things from cheesing itself up. ‘Visions of Death’ brings further prominence to the said lead work, alongside explosive, percussive rhythm work, and blistering solos to boot. The instrumental ‘Nebelhexe’ is a gratifying listen of sorts amidst the audile pulverization present on the rest of the album, and features some interesting percussive interplay. The closer track, ‘Rest’, appropriately named, alternates between slow segments featuring glum, lugubrious guitar harmonies and regular death/thrash riffs and makes for a more than decent album closer.

This album wholeheartedly bows at the altar of bands that formed the bridging gap between the then in-vogue thrash metal sound of the early 1980’s and the incipient death metal styles that would derive largely from it. An era where the distinction between the two was hazy and poorly defined, added to this the incensed and rabid nature of the music, which didn’t exactly help to provide the slightest of scope for highbrow discussion on the trivialities of stylistic division and distinction. Fans of Sodom, Hypnosia, Sadus, Kreator, Slayer and Morbid Saint will be hooked onto this record in an instant. Moreover, this album is certainly a good break from the typical alcohol, party, zombie, biker and crossover-driven retro-thrash metal style that seems to plague the retro-metal scene, or even the more infernal, blasphemous and violence-driven bands a la Suicidal Angels and Bywar. The guitar work is ferocious, the bass plods along with the guitars and drummer Mani is nothing short of vicious and hostile on the kit. Atop this madness, Stebich’s vocals only serve to intensify this maniacal orchestration, sounding like the gustative bastard child of Mille Petrozza and Patrick Lind. In conclusion, Deathstorm smartly draws its fuel from a variety of influences within the same broader sub-genre as opposed to riding off their love for a specific influence, and thus fall short of becoming entirely derivative. This is an immensely enjoyable album, although there’s certainly room for Deathstorm to undergo further stylistic evolution and truly make their mark in a scene filled to the brim with rehashes and blatant rip-offs.