Before our(this website’s) virtual annihilation by a few jobless hacker pricks late last year, i had this rather unique series running. Diamonds in the Rough. If any of our old readers could recall, Diamonds in the Rough was where i visited a few songs over the internet. Mind you, that all of those songs were off albums that saw release in a particular month. I embark on this rather exciting exercise towards the end of every month. This was also how i got to find some exciting new bands and releases myself. And here today, after the site has reincarnated itself, i am obliged to kickstart the series back again. and oh boy do i love doing this ! 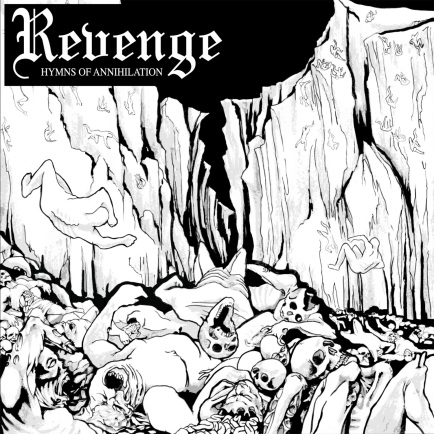 Ever wondered how a band with a pure hardcore styled vocal delivery would sound with a rather metal, old school death to be precise, sound? Well here you have Revenge. Attached below is a song from their 2nd LP titled “Hymns of Annihilation” and unsurprisingly the song is titled “Annihilation”. With pure misanthropy, as depicted in the cover art above, as their motto i guarantee that this song will slaughter every soul in sight. Huge chunky riffs coupled with a vocal attack that is relentless yet typical of ‘straight in your face’ hardcore, you have a song that can well spur global obliteration on its own.

My respect for Selfmadegod records, have quadrupled for they seem to sign the best of the brootz. Last year’s Masachist seemed like heaven sent. It was easily my favorite death metal album of 2012, yet still it never got the attention it deserved. Come 2013 and i guess i’ve found a likely replacement in Unburied, who were signed recently to Selfmadegod. These guys have been in the fray since 1994, the glory days of death metal, and that shows. Dabbling in the ever so unholy goregrind side of things, they seem fresh and instantly catchy. Attached below is a track which is probably from the entire album that has been uploaded on bandcamp. Due to personal preference, i happen to choose a track that is more death metal than grind. Make sure you  strap yourself to a chair before clicking the play button. Caution advised.